in the brush industry

Creative concepts and guaranteed highest quality with optimum service – that is what WÖHLER stands for since over 88 years in the brush industry.
We approach our challenges differently giving us access to unique solutions, which remain unobtainable to others. Countless customers worldwide are inspired by our fascination, inventiveness and quality »Made in Germany«.
Our smart expertise and flexible, modular engineering allow us to provide our customers with compact, custom solutions for boosting their production performance and efficiency, always under careful consideration of their specific individual requirements.
In the in-house development department inventiveness, expertise and the longstanding experience of a skilled team go to form a unique and readily accessible innovation pool. Demands made by IIoT are effectively met by WÖHLER.
Worldwide patents testify that a large number of significant optimisations and innovations made in the special machinery sector are linked to WÖHLER, endorsing its claim to being »always a step ahead«.

Reach the goal together!
We create long-term and fair partnerships with customers and suppliers. As a family company, we act in a socially responsible and sustainable manner.
Generate quality together!
At WÖHLER, every employee is a valuable service provider. In this way everyone contributes to high quality products. Funded reflection and optimization ensure that WÖHLER machines contribute to increasing your competitiveness through their enthusiasm for innovation.
Meet customer expectations!
Professional and customer-oriented advice and finding solutions in process and product development ensure that your individual requirements are met. For a successful and future-oriented automation solution.
Live quality management!
As a DIN 9001 certified company, we are committed to meeting all of the requirements that apply to us. The entire WÖHLER team lives this form of quality assurance.
Build strengths!
Always being one step ahead of the market through innovations and service – that is the strength of WÖHLER. We will continue to use this know-how and potential in the future to successfully support our customers. 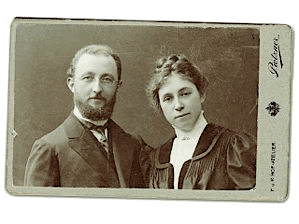 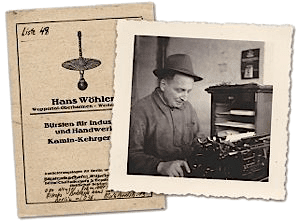 Hans WÖHLER continues the
brushmaking business of his father
in Wuppertal 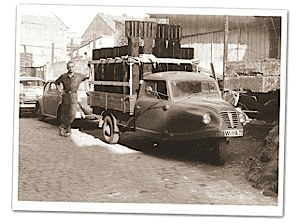 1916. The First World War rages in Europe. During his military service Wilhelm WÖHLER from Berlin gets to know the master chimney sweep Rimsky. The two friends get together and the inventive Wilhelm WÖHLER begins making the first wire brushes for chimney cleaning. What started out as a sideline increasingly becomes an occupation. It was only logical that Wilhelm WÖHLER registered his Berlin brushmaking business in 1932, running it in the Dernburgstraße 47, Charlottenburg up to 1947.
1948. The Second World War is over. Post-war confusion leads Wilhelm’s son Hans WÖHLER to Wuppertal, where he continues the brushmaking business of his father. He rents rooms over a garage and uses the pioneering spirit of the young Federal Republic to expand his production, which he moves to larger premises in the Tellweg, Wuppertal in 1953. The core business continues to be cleaning instruments for chimney sweeps, although the first brushes for industrial use are also produced at this time.
1958. Hans WÖHLER develops the HW chimney cowl, which is still produced today in a similar form. The design and construction of the first wire cutting machine in 1961 marks a further milestone in the company history: Hans WÖHLER’s successful start in the machinery business. 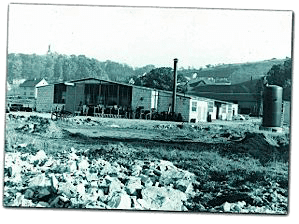 The new plant
in Wünnenberg 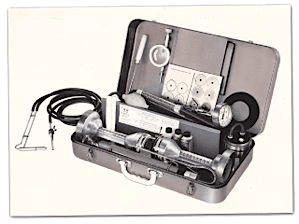 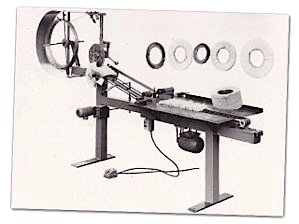 Machine for production
of single rings

1962. Ever conscious of company development and expansion, Hans WÖHLER establishes contact with the town of Wünnenberg and conducts constructive negotiations with the local mayor Laufkötter in a pleasant, rural atmosphere over the possible plot of land and its selling price. The industrialist from Wuppertal negotiates a price of 7.50 DM/m², receives further funding from the state structural development programme and immediately starts planning the plant in the Schützenstraße.
1964. The company moves from Wuppertal to Wünnenberg. Three employees took the step of moving from the region Bergisches land to the southern Paderborner land. Others came to the company having read locally posted notices and word quickly spread about the young company and the promising new jobs it was offering. However, Hans WÖHLER decided not to break with Wuppertal, which remains company headquarters until 1980, the remaining sales outlet there finally being closed in 2002. For the company owner the size of the new plant in Wünnenberg seemed to be over the top at the time. He is quoted as having said to his plant manager: “Krei, we’ve built this much too big!”. One of his seldom misjudgements, as it turned out only a few years later.
1965. Already in the following year, the company starts in developing measuring instruments. The A 66, designed for the measurement of CO2 in fireplaces, marks this significant step forward. Already at this early stage the core businesses and product groups of the WÖHLER company were clearly defined: Measuring and cleaning instruments, machinery for brush production and technical brushes for industrial use. 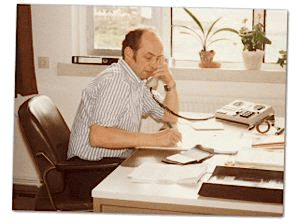 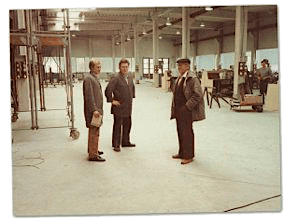 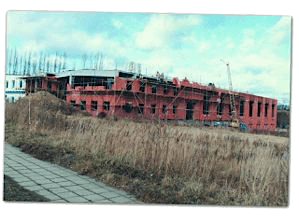 1980. Wünnenberg becomes the key location for WÖHLER. As a result Dr. Fritz WÖHLER, who had since taken over the company management, transfers the company headquarters from Wuppertal and changes the company form in 1988 to the limited company of “WÖHLER Technische Bürsten Maschinenbau GmbH”. The company experiences steady growth. Technological progress creates new opportunities and WÖHLER recognises the potential for new products, which prove successful on the market.
1985 to 1989. WÖHLER makes further investment in Wünnenberg to optimally serve the growing markets. Two new production halls are built, new jobs created and WÖHLER strengthens its position in the competition. The plant continues to expand.
1994. As the borders to Eastern Europe are opened, Fritz WÖHLER grasps the opportunity of investing in the Czech Republic. He establishes the company WÖHLER Bohemia s.r.o. in Pelhrimov as an “extended workbench”. Pelhrimov is the heart of the Czech brush industry with a qualified and experienced workforce. Fritz WÖHLER recognises this locational advantage and uses it accordingly for his investment. In the meantime more than 75% of the Czech company’s production is sold through its own distribution channels. 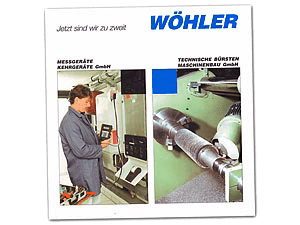 Successful separation of
the measuring and cleaning
instrument division 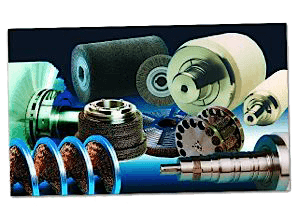 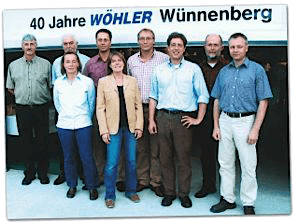 1996. The strong development of the measuring and cleaning instrument division calls for further structural change. The company management decides to separate and operate independently in the future as WÖHLER Messgeräte Kehrgeräte GmbH.
1999. The WÖHLER Holding is established and forms a future canopy over independently operating companies.
Investments abroad are continued and the company HTFilament s.r.o. is established in the Czech Republic for the production of heat resistant special filaments.
2002. The brushmaking machinery and technical brush divisions both operate highly efficiently and increasingly independently. The companies WÖHLER Brush Tech GmbH and WÖHLER Technische Bürsten GmbH are established. Union FM-Rolls Co. Ltd. is established in Taiwan, starting production in the same year. WÖHLER enjoys a worldwide presence. Its subsidiaries and representatives around the world make WÖHLER a true global player. In 2002 Dr. Fritz WÖHLER withdraws from the operational business and dedicates himself to the development of the WÖHLER Holding.
2003 to date. Despite progressive globalisation WÖHLER still succeeds as a family business and remains loyal to the Bad Wünnenberg location. In 2003 the fourth generation of the WÖHLER family takes up office, to successfully lead the Holding into the future. This is clearly demonstrated by the new management of Dr. Katrin WÖHLER and her brother Wolfram WÖHLER in their investment made in the new production and administration building in Bad Wünnenberg. In 2007 the Messgeräte Kehrgeräte company takes its place in the prestigious new facility, built directly adjacent to the existing plant complex in the Schützenstraße. 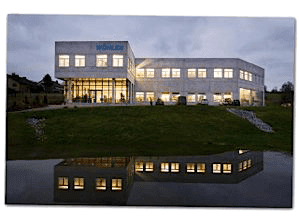 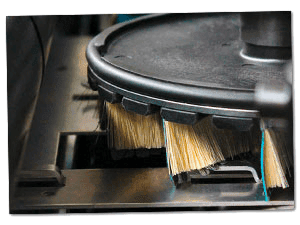 2007. The opening of the new WÖHLER facility is a good reason for duly celebrating the company’s 75th anniversary. Hundreds of guests view the modern workplaces in production and administration over an impressive area of 15,000 m².
2009. Always the focus of our activities: The WÖHLER customer. With its successful certification in accordance with DIN EN ISO 9001:2008 WÖHLER Technische Bürsten underlines once more our traditional focus on high quality standards and commitment to customer satisfaction.
2010. Our successful development of innovative products is confirmed at the EuroBlech fair by being presented with their Innovation Award. WÖHLER Brush Tech was successful against strong competition with its EdgeRacer technology, making edge rounding child’s play.
2013. WÖHLER Brush Tech GmbH is successfully certified in accordance with DIN EN ISO 9001, further illustrating that the Wöhler customer is the focus of our activities.
2015. WÖHLER Bohemia acquires the roll pin division of MBK Machinery and further expands its machinery programme for paintbrush and roller production
2016. “WÖHLER Messgeräte Kehrgeräte GmbH” becomes “WÖHLER Technik GmbH”. Further enlargement of our production facilities in Bad Wünnenberg (5600 m²).
2022. WÖHLER Brush Tech celebrates its 90th anniversary.

As a medium-sized family-run company with local roots, we feel particularly connected to our region and the local people. Supporting social projects outside of everyday work is therefore an important factor for us.
We have been supporting social and cultural projects and organizations for many years:
– Firefigthers Bad Wünnenberg
– Catholic primary school Bad Wünnenberg
– Liebfrauengymnasium Büren
Furthermore, we invest specifically in the training of our employees and offer them support to enable them to combine family and work.

WÖHLER Brush Tech GmbH is part of WÖHLER Holding GmbH. Under this roof, …